Exploring the Depths of Vietnam's Ancient Past 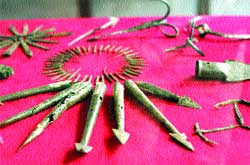 A conference recently held in Hanoi (summarized here) sought to bring together new research, perspectives and voices of both international and Vietnamese archaeologists in a concerted effort to modernize the practice of our discipline within Vietnam itself, as well as give the general public a more accurate understanding of their own nation's past...before nation states existed. An example of just why this matters can be read here, in which the sale of a Dong Son Iron Age period bell (and many other items such as those in the photo above left) is discussed against a melange of viewpoints re cultural/national origins.

In preparation for an overview exhibit of Vietnamese archaeology and history that will tour three museums in Germany from 2014-2015, numerous scholars assembled at the Goethe Institute from Feb 29-March 2 to decide which sites, artifacts, maps etc. can best illuminate the last 4,000 years of Vietnamese prehistory and, most importantly, place it into regional context. The institutions in question are the Museum of Archaeology in Herne, the Reiss-Englehorn Museum in Mannheim, and the Archaeology and History museum in Chemnitz. It appears that the key sites and institutions in both northern and southern Vietnam (still a politically, culturally, linguistically and historically relevant division) are to be included in this traveling exhibit-thus providing a more unified background onto which the exhibit can 'map' the complexities of what is currently known about Vietnam's ancient past.

The goals of this conference in the abstract were two-fold: To highlight the importance of using and sharing contextualized archaeological discoveries as a means to counter-act the still prevalent nationalistic leanings of official interpretations and local public perception of the ancient past (when thought of at all), as well as share the richness of pre-Colonial Vietnamese history with a German public suggested to be mostly ignorant of it, according to project liaison Stefan Leenen. To me, the focus on continued improvement of methodology and analytical technique and the need for the current generation of local archaeologists (many the recipients of overseas training/field school experience and/or directly benefiting from international collaborations) to join the "pioneers" in "setting their own agendas for research," as noted by Prof. Ian Glover, one of the delegates.

As native Vietnamese speakers, they are the best suited to directly disseminate the results of their research to the public, and I have been honoured to work with and learn from many of them during my own tenure at the Institute of Archaeology in Hanoi. I would add (as I always do), that for this collaborative progress to continue, it is crucial that more foreign archaeological scholars in Southeast Asian countries make efforts to learn at least one of the main local languages. The conference also saw the inevitable airing of differences in Western and Vietnamese viewpoints, and the use of the past (and key symbolic artifacts within, such as Dong Son drums) as a means to assert economic sovereignty to contested territory, such as the Parasol Islands, which Vietnam, China, and several other nations currently seek to occupy/exploit, and use deliberately targeted archaeological "research" to further.

While these are important, I will leave them aside in favour of giving proper mention to the looting issue as discussed at this conference. The fact that Vietnamese site looting (often less visible on the ground that in other regional countries such as Cambodia) was mentioned at all is a very positive outcome, if Vietnamese and international scholars and activists are going to ever stem the "cultural rape" (as Prof. Higham succinctly puts it) occurring throughout the region. With the collection of ancient artifacts, especially Dong Son metalwork, still openly discussed online, the outcomes of conferences such as the above deserve all the international press they can get. Let's see what shape the final exhibits take, how Germany receives them, and most importantly, how the Vietnamese public receives them.
Posted by Damien Huffer at 6:00 PM 3 comments:

Organized Crime and the Antiquities Trade? 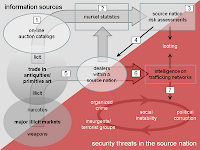 A manuscript released in January of this year, written by Dr. Alderman of the University of Wisconsin law school, takes a very thorough overview of the global antiquities trade's key factions and the purported links between it and trans-national organized crime. Providing numerous case studies and discussing several categories of so-called "criminal excavators," the middlemen they supply (both local wholesalers and inter-regional traffickers), and the roles of final-destination retailers, private owners, and museums/curators of diverse ethical stances in completing the circle. It is this very cycle that Drs. Neil Brodie and Simon Mackenzie and colleagues from the University of Glasgow have just received a major grant (and popular press) to study in more depth. I imagine that a good visual representation of the connection between syndicates and the trade is something like the visual above left...
Most case studies discussed in this original document derive from European, North American or South America, but the Southeast Asian trade through Bangkok and Singapore gets some mention. I am especially happy to note that the trade in small, portable items from Southeast Asian prehistoric sites (e.g. "beads by the bucketful," pp. 24) is also discussed, along with the more visible word-wide trade is historic period statuary from Cambodia, region-wide, and elsewhere. The key discussion of organized crime and the antiquities trade at the end of the document centers around the issue of "lateralization," i.e. the inter-connectivity of the various elements that sustain the trade (creatively termed a "biosphere," pp. 31).
The claim that there is no such thing as a licit trade truly separate from the illicit one is something that I in my research have come to agree with. As discussed in the manuscript, the licit trade uses the infrastructure of the illicit trade to support itself, and all participants help support said trade, even those individuals who "insist on provenance and have never handled a tainted object" (pp. 32). Although there are specific points I disagree with (e.g. referring to those who sell the occasional artifact found while digging gardens or plowing fields-the "subsistence diggers"-as criminal), the information provided is well written for the informed general public, well referenced, and deserving of wider dissemination.
Posted by Damien Huffer at 10:32 PM 3 comments: