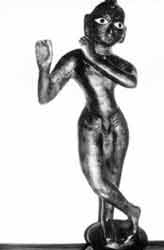 A recent article brought to my attention via the Museum Security Network provides an update on the ongoing idol/antiquities thefts still occurring throughout India. A Times of India story is now reporting that many of the so-called 'ashtadhatu' (eight metals) idols, the genuine article stolen from temples in many states throughout the country (see photo at left, taken from www.hindu-blog.com), can now be increasingly found for sale at many places of tourist renown (e.g. Agra, Varanasi, Allahabad, etc.). In fact, according to the article, 18 ashtadhatu idols have been stolen from three temples over the past two weeks alone (pre-dating Jan. 10th), in three ongoing cases!

As recently as last year (May, June, and September), several independent groups of criminals were arrested near the Nepalese border, part of a trend frequently noted by members of both the SOG (Special Operations Group: police) and STF (Special Task Forces: detectives); namely, that of India or Nepal based middlemen and criminal syndicates arranging for transport of the stolen idols and antiquities into Nepal for later transport to the international market. Apparently, states and regions such as Uttar Pradesh, Kashinagar and Kanpur have been especially hard hit, but it seems reasonable to expect that every state sharing a border with Nepal has seen smuggling events. Now, however, it appears that the stolen antiquities are increasingly sold through local channels in tourist hotspots such as those mentioned above, according to Arvind Chaturvedi, of the Special Task Force.
Although such thefts are in clear violation of the Indian Penal Code (sections 414 and 411), and the Antiquities and Art Treasures Act of 1972, the high prices involved still drive many to take the risks. Thus, only increased monitoring of porous international borders, bolstered customs agency staff, and increased night patrols of vulnerable temples (and open archaeological sites in general, I might add) will 'arrest' this problem. Unfortunately, it seems that communication problems between local priests, the police and investigating authorities is hampering this effort. Although one senior police official is on record in the article for 'vehemently denying' that his region (the Kanpur region) has become a 'hub of antique idol smuggling,' based solely on the occasional apprehension of smugglers heading for the border or to meet clients in urban areas, if the Special Task Force detectives are noting such a marked uptick in the number of arrests and cases, this is arguably still cause for concern.
Another issue raised by an unnamed customs official is the problem of within-country circulation of antiquities from north to south (and presumably vise versa) for "re-use" in different Hindu temples than those they came from. "During one of my trips to South India, many valuable sculptures, coins, manuscripts, statues, paintings, and ornaments from across the nation were freely available there in art markets," the article reports. One would hope that the purchasers of such items for religious purposes would question whether or not they were initially stolen! I will keep following developments in this situation as I encounter them, but here's hoping that the increased monitoring attested to in the article will be accompanied by at least some additional funding for local authorities to keep doing their jobs, as well as increased awareness by potential overseas purchasers that that intriguing, 'exotic,' idol for sale at the local night market, on eBay, or at an upscale gallery, just might not come from "an old family collection."
Posted by Damien Huffer at 2:04 PM No comments:

In the spirit of a recent post over on the SAFECorner blog, regarding the repatriation of Native American remains under NAGPRA laws, now 20years on, I would like to take this opportunity to share a repatriation story from my adopted "home," Australia. This story conserns the return and reburial of two adult skeletons, ceremonially wrapped in bark cloth and buried according to the still-living mortuary customs of the Bundjalung people, whose Country lies near Lismore, New South Wales, after being stored for 200 years at the Leiden University Medical Centre in Holland.

Originally spirited out of Australia for "research purposes" by the famed botanist Joseph Banks, they were seemingly quickly forgotten about until an effort was made to identify and track them down as part of Australia's "National Repatriation Program," overseen by the Department of Families, Housing, Community Services and Indigenous Affairs. Ethnographers from the National Museum of Australia, here in Canberra, as well as the Dutch ambassador (left nameless in this article), helped to assure their smooth transfer to the National Museum, and then Southern Cross University (near Lismore) upon their return to Australia, while two Bundjalung community elders (Gwenn Hickling and John Morrissey) traveled to Leiden to oversee the first stage of the repatriation. What is especially touching to me is the immense pride that several younger members of the community felt knowing these 'old people' have now returned. This even included the singing of a Welcome song by Goonellabah Public School students in the local language, part of continuing efforts at cultural and linguistic preservation/revival. Good on them!

It is not specified as to how much, if any, the remains were anthropologically or osteologically studied and recorded before repatriation occurred, nor what exact criteria was used to determine that the Bundjalung community are the closest living descendants. Like much of coastal temparate/tropical Australia, the Lismore/Richmond Rivers area would've been home to numerous small, linguistically distinct groups at the time of European contact. This, to me, demostrates that 100% certain, 1:1 examples of archaeological/ethnohistoric remains being matched to one particular ethnic group is still problematic across much of Autralia, as it is in America, Canada, and anywhere else that Western contact saw the forced movement and mixing of peoples. Indeed, there are even claims, primarily made by the descendants of European settlers, that the peoples known as Arakwal and Bundjalung "don't exist," but the validity of this is hotly contested. However, it is possible that supporting documentation/"labeling" by Banks himself might have been curated along with the remains and associatied mortuary artifacts. Nevertheless, this is an event that should be celebrated by all, given the solace it has so obviously provided. As Elder Bertha Kapeen stated, "It's very significant for Aboriginal people everywhere, not just here."
Posted by Damien Huffer at 5:38 PM No comments: