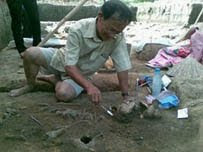 The links here, from the China Daily Post and Thanh Nhien News.com, discuss the recent archaeological discovery (in April, this year) of approximately 15 "tombs" (read earthen pit graves) dating to the "Phung Nguyen" culture c. 3,500 BP, within the urban Dong Anh district of Hanoi, in advance of ongoing development. The excavation was lead by my colleagues Drs. Nguyen Lan Cuong and Lai Van Toi of the Vietnamese Institute of Archaeology (Vien Khao Co Hoc). The photo above-left is of Professor Lan Cuong himself hard at work*! The results of the excavation indicated that men, women and children were buried in this cemetery, and that the local "aristocracy" (here defined as individuals with a somewhat greater quantity of diverse ceramic and bronze grave goods), consisted of adult individuals with their upper incisors removed (a practice referred to as tooth ablation in the bioarchaeological literature). Numerous studies can now be done on these individuals to determine their place of birth, any familial connections within this so-called "aristocracy," dietary, health or activity differences between the sexes, comparison to other sites, etc. Let the science commence!

Although I take semantic issue with use of the term "aristocracy" when referring to the social organization of this still-poorly understood time period, the material culture found in the graves, and in surrounding and overlying archaeological stratigraphy, all make sense as belonging to the Red River plain Bronze Age sequence. The uppermost soil stratum was even reported to contain "a system of holes believed to be the outer most rampart of the Co Loa citadel," but this claim will certainly take more excavation over a wider area, and further analysis, to verify. Regardless of the final verdict, the recovery of an intact prehistoric site with burials in urban Hanoi is quite fortunate, as many of the objects, especially the ceramics and bronze artifacts, are common finds in urban "souvenir" shops, even if many of them turn up through field plowing in surrounding areas. Furthermore, uncontrolled development has damaged several sites throughout urban Vietnam. The fact that the Phung Nguyen burials were 1.5m under the modern ground surface no doubt helped preserve them. Hopefully, this is the first of a series of new sites that will be discovered and carefully excavated before they are destroyed as Hanoi continues to "modernize." Fingers crossed.
*=photo from Thanh Nhien Daily.com
Posted by Damien Huffer at 10:27 PM No comments:

This link, to a piece written by Terressa Davis of the NGO Heritage Watch, is an excellent summary of the c. 2006, and arguably still current, situation pertaining to the trade/smuggling of illicit antiquities, both historic and prehistoric, out of Cambodia; deserving to be further disseminated. While prehistoric and small portable artifacts now make up the bulk of the Southeast Asian trade, even a casual perusal of online sources will demonstrate that genuine Southeast Asian archaeological material culture of all types (with the occasional forgery thrown in) is still reaching its final destination in private collections and museum gallery floors, sometimes still with the compliance of major auction houses. Even with the majority of large pieces of Angkorian (12th-16thc) statuary still on the art market having at least some provenance back to the early-mid 20th century, stopping the in-country flow of those objects that are being traded, given continued cases of local corruption hampering efforts, remains difficult. Without the cooperation of source and demand country governments and citizens and further time and effort devoted to diverse educational outreach, current momentum will stagnate. Constant vigilance!
Posted by Damien Huffer at 12:07 AM No comments:

Although I'm aware that Iraq is not in fact in the Southern Hemisphere, I want to post a link to this video here to do my part to give it further coverage in the media and blogosphere.

I originally encountered the video here. The source is AlJazeera's English Language broadcast. It is only by further investigations and reporting like this, but in other heavily threatened locations around the world as well (Cambodia, for example), that the "Big Lie" perpetuated by die-hard antiquities dealers can be further exposed. Can anyone, especially anyone claiming to be a "responsible collector," look at videos like this and still not think that fresh loot is fueling the global market? Wouldn't one have to at least become a little "suspicious" as to the authenticity of that "Old Collection" provenance lable seen on yet another cylinder seal or cuneiform tablet? Yes, broken up musuem and private collections pre-dating 1970 do exist, but those items too are especially likely to have left their context through what would today be defined as looting, given the near-complete lack of heritage laws and systematic, scientific archaeology at the time. Seeing essentially the same activities continue today in war-torn countries like Iraq and Afghanistan, or those still reeling from the effects of war 35yrs on, could lead only the most willfully ignorant to the conclusion that the looting threat is "over exaggerated!"
Posted by Damien Huffer at 3:17 PM No comments: