This post is to further spread the word on the recent repatriation of an Angkorian (Jayavarman VII) era silver plate to Cambodia. The original article is here, and this story came to my attention through the vigilant reporting of my colleague Alison Carter (here). Thanks! What's important to me is that the article suggests the plate was voluntarily returned by its original purchaser, one Zelnik Istvan, a Hungarian businessman who claimed to have purchased the item in 1970 in order to add it to his private Southeast Asian Gold Museum. Of course, the legal export status, context, ownership history and provenance of the other 50,000 artifacts is not discussed, but this case demonstrates that repatriation is not out of the question for his museum when warranted, which is very commendable.

According to the article, the original vendors claimed a provenience around the Banteay Chhmar temple, but this is unverifiable. Tit Sokha, a representative of the National Museum in Phnom Penh, mentions the ICOM Cambodia Red List of stolen antiquities, which has encouraged the return of some specific artifacts (mostly sculpture) by private foreign collectors, but no mention is made if the plate was on the list itself, or known about at all before Istvan returned it. Thus, although original context will forever be lost, the return of this item at least allows it to be repaired and shared with the Cambodian people (and the world) as part of their heritage.
Posted by Damien Huffer at 5:00 PM No comments: 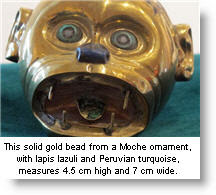 I can happily report that two recent legal efforts to repatriate important items of cultural heritage, long held outside of their place of origin, have both ended in success. The first case (also here) conserns the return of a gold bead in the shape of a screaming monkey with turquoise eyes belonging to the Moche culture, which flourished along the northern Peruvian coast from c. 100BC-800AD (see above left). The pendant is known to have been illegally looted from an unidentified tomb (suggested by one of Peru's most preeminent archaeologists, Dr. Walter Alva, to stylistically affiliate with funerary objects from the elite tombs of Sipan, in the northern Lambayeque valley) in 1987. For decades, archaeological sites large and small have been targeted by huaqueros (tomb robbers) in this region, but transnational cooperation between Universities, museums, the more consciencous private dealers, and governments themselves have begun to turn the tide.

The case for repatriation began when Dr. Alva recognized the artifact in the Palace of the Governors History Museum in Santa Fe, New Mexico. As noted in the article, artifacts similar to this pendant have likely been looted from smaller sites within the Sipan sphere of influence, making the removal of this item from the private antiquities market all the more unusual, especially given the high prices fetched for other golden Moche artifacts on the black market or in federal stings. The bead was originally part of the Bourne collection, dubbed by journalist Roger Atwood as "the finest small collection of pre-Colombian art anywhere," but obvious care seems to have been given in its curation, and museum authorities commendably agreed that this artifact more appropriately belongs in Peru so that, in the words of Director Frances Levine "it can be better used to help museums in Peru tell their own stories."

The second case involves the recovery of 20 severed Maori heads (!) by New Zealand after almost two centuries of storage in museums. The repatriation ceremony occurred at the Musee du Quai Branley, Paris, with relevant governmental authorities, New Zealand embassadors, and anthropologists/historians from the Te Papa museum, Wellington. According to the article, 200 heads have been returned from a total of 14 countries (demonstrating the wide distribution these "memento mori" had during the Colonial period), but several others "might remain in private collections."

What struck me specifically about this case is both that a special law had to be passed to finalize this specific repatriation (why?), and that French authorities "worried that this might set a worrying precedent for other artefacts such as Egyptian mummies and the bones of early Christian martyrs." Given that many of the artefacts taken during colonial expeditions have been languishing in museum storage for as long if not longer than the Maori heads discussed above, perhaps success stories such as the above WILL provide the incentive needed for small European museums to assess their old collections, record all that can be recorded from such human remains, and then take the lead in repatriation instead of waiting for legal action. Fair's fair...
Posted by Damien Huffer at 2:09 PM 2 comments:

Antiquities Smuggling through the Sunderbans 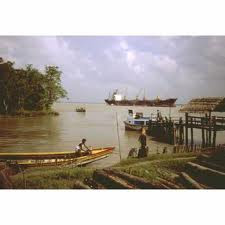 Today, this article came to my attention (via Museum Security Network). It concerns the recent busting of an antiques smuggling network through India's Sunderbans (the vast wetland formed by the superconfluence of the Brahmaputra, Padma and Meghna Rivers and their tributaries), into today's Bangladesh and Myanmar. According to the article, 11 people were arrested, but authorities had an inkling of this network's existance as far back as 2010. Due to its remoteness and primarily waterlogged state, artifact and people smuggling and wildlife poaching have proven difficult to patrol throughout this vast area.

The primary artifact confiscated in 2010 was a two-foot tall bust of the Buddha, but no mention is given in the article of the type or age of the antiques or antiquities most recently confiscated. Numerous cases involving the smuggling of historic period or ancient Hindu and Buddhist statuary and religious paraphernalia, sometimes boldly robbed from temples at night, have been reported in recent years, including on this blog (e.g. here and here). Now that those who appear to be the main ringleaders have been confiscated, we can wish the local and transnational authorities much success in all future raids and in getting to the bottom of just how extensive antique/antiquities smuggling is in the Sunderbans.
Posted by Damien Huffer at 7:29 PM No comments: