Is Christie's Turning Over a New Leaf? 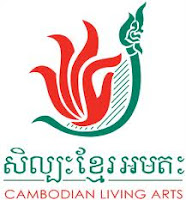 Perhaps this is nothing more than a PR stunt to counteract some of the recent bad press that major auction houses like Christie's and Sotheby's have received of late in regards to Southeast Asian antiquities, but this article (brought to my attention by colleague Tess Davis), is worth sharing. It concerns a recent auction held in Phnom Penh by Christie's, in which recently produced pieces of contemporary Khmer art (mostly sculpture and painting), made by some of Cambodia's best up-and-coming artists. They were sold off purely to raise money for the NGO Cambodian Living Arts, a subsidiary project of the Marion Institute.

CLA enjoys a 14 year long history of helping to revitalize Cambodia's "intangible" cultural heritage, and is, according to their website, founded by and maintained by Khmer/ethnic minority individuals; both the masters who teach and the students who take instruction. Their logo above left captures their commitment to teaching both traditional dance and music (instrumental and vocal). Especially commendable to me is their scholarship program for high school-University students (in collaboration with the Ministry of Culture), as well as their commitment to including English and computer literacy to all their students, especially those from remote rural villages. As a 'home grown' way to continue to respond to the tragedies of the Khmer Rouge (that killed off 90% of the ethnic Khmer artists, let alone those of minority groups), these days it appears to be getting increasingly positive publicity and recognition nationally and internationally. It's multi-media Season of Cambodia show will even play New York City in 2013!

Of course, noble charity events like this do not excuse otherwise notorious auction houses of past crimes or current/future transgressions in regards to the selling of recently looted or insufficiently provenanced antiquities. However, their willingness to attach their name to this at least demonstrates that someone in their employ or board of directors is not solely concerned with profits, and I think they should be given the benefit of the doubt re their motives in this instance. Considering all the money such auction houses have made from the wholesale destruction of tangible heritage, giving some of it back to help preserve the intangible (itself arguably as finite as the archaeological record) is the least they can do.
Posted by Damien Huffer at 3:48 PM No comments:

(Re) Defining Cultural Heritage in Vietnam? 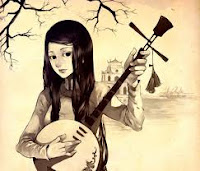 It appears that debate over what defines cultural heritage in Vietnam, both tangible and intangible, is being held once again. This article describes the goings on of "a series of conferences," all centered around the issue of where to draw the line between cultural performances for tradition's sake vs. renewing/maintaining customs that otherwise might die solely for the benefit of tourists. This is especially true for aspects of "intangible" heritage, such as folk music and singing and theatre, the beauty and merits of which would most likely not translate well or, rather unfortunately, be deemed not aesthetically or aurally pleasing enough for the majority of tourists. Certain aspects of a culture like clothing or handicraft will always find a market if the objects are at the very least "beautiful" enough (even if original dyes and patterns are not used, or if the more abstract meanings behind the use of authentic motifs are kept secret to foreigners).

"Intangible" heritage doesn't even have this luxury, yet it deserves protection all the same, especially as some styles of song and dance are being kept alive by very few elderly masters, desperate for apprentices. Examples given in the article from Vietnam include Central Highlands gong music (video example here). Although I can't personally attest to the accuracy of this video, I agree with the general sentiment expressed that renewing such performances for tourist's sake only would cheapen them in time, even if the younger generation would not have been made aware of these "lost" ceremonies otherwise. More popular forms, such as Hanoi's Water Puppet Theatre will always have its commercial and international appeal, but where does that leave the so-called 'niche market' styles like Quan Ho (northern) or Ca Tru (central), or music of any of the numerous ethnic minorities (e.g. the Jarai)? Let alone those of the dozens of other ethnic groups throughout the region and more contemporary styles influenced by traditional music from (e.g. a Karen music video here and slightly older Khmer folk/pop here)?

I also agree with Dr. Trung Quoc's statement that too much government involvement, as opposed to grass-roots community initiative, is in the end not a good thing. The same problem is always at hand in regards to historical and archaeological site preservation/excavation vs. commercial management for tourism vs. short-term looting. The reality in much of Southeast Asia (and the world) is that there is only so much independent academic researchers/NGOs can be expected to foot the bill to subsidize the day to day needs/gear of non-commercial musicians (or everything needed to preserve an excavated site).

World class institutions such as the Musical Instrument Museum and Earthwatch routinely sponsor their own research or arrange for volunteers to help on digs, with the proceeds helping to fund the project. With so many art and music styles (and archaeological sites) worthy of protection or rediscovery before they are lost, a happy medium needs to be found soon. As with the archaeological record, linguistic diversity, biological diversity etc., when taken out of the purely academic realm, time is of the essence to preserve what we study for its own sake and the people who have always lived with it first and foremost.
Posted by Damien Huffer at 9:18 PM No comments: