Back in the 'Berra 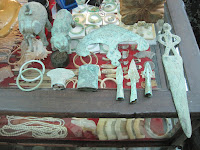 I have made it back to Canberra after a successful, but rather hectic, final research trip to Hanoi. All in all, the data collection went well, and should definitely improve the final PhD produced. I also had a bit more time to investigate antiquities sellers in more 'remote' areas of Hanoi; the very area (around Nghi Tam St., West Lake District) in which I first documented a no-questions asked antiquities trade during my first trip (although you can bet I did ask questions where appropriate).

As expected, numerous stores were once again encountered in this area, of which I had time to look around, posing as a 'buyer off the street,' and talk to the owners of three. Unfortunately, I did not have time to seek out similar stores in Saigon. Maybe next time. I will blog about what I uncovered at each of these locations in time; what they were selling, for how much, what they had to say or not about how to ship items abroad, their usual clientele, or the general acknowledged legality or illegality of the enterprise. While I fully admit that my "sample size" is small, nothing that I learned caused me to view this information as atypical for the city. In my opinion, on-the-ground "check-ups" and documentation every once and awhile is very important. As an example of the primarily Iron Age Dong Son artifacts encountered in most stores, see the photo above left. Photo courtesy of the author, taken at the Chi Lan "souvenir shop and art gallery," Hang Bong St., Hanoi. More to come, so stay tuned.

Exploration of side streets and back alleys in search of those scattered shops that still openely sell genuine antiquities has been occurring at a decent pace, whenever I can squeeze it in between my "day job" and those times that it's not pouring down rain. My investigations see me posing as a potential "buyer"/tourist off the street, to see who shows me what, for how much etc. Of the three shops visited so far, one only offered clear and freely admitted replicas of prehistoric artifacts (Dong Son drums, for example), but genuine historic period ceramics and 18th-19th c. statuary. A second shop sells a wide variety of genuin historic period pieces (mostly Han-Ly/Tran Dynasties) with some admitted by the owner to derive from shipwrecks off the central coast, but deliberately avoids handling prehistoric objects.

The very first shop I entered, however, was the most open about their activities. Located in the heart of the central Old Quarter district by Hoan Kiem lake, the "Van Hoa Viet" (Viet Culture) shop displayes two to three glass cases full of genuine prehistoric-historic ceramics (Neolithic period to Han), as well as Dong Son spear heads, axe heads, bangles (with human remains!), bracelets, a few beads, and several late Palaeolithic ("Da But" period c. 6-5,000BP) shouldered adzes, crafted from a variety of stone. I asked about price while pretending to comparison shop. It seems that, at least at this store, antiquities are also able to be bargained down if one can manage it. At all such shops I've visited to date, I was told that "friends" (middlemen or genuine friends of the family or both?) would call them personally when new items were found, or else go from shop to shop to sell what they could. It is my opinion that those who deal openely in antiquities here are probably aware of local heritage laws (which dictate that nothing real over 100 years old is allowed out of the country), but ignore them anyway. This matter will be investigated further-with caution.

In my remaining time here, I will search out as many other shops as I can; both in Hanoi and in Saigon when there. I readily admit to a lingering language barrier between me and my informants, but I can only do my best. Further thoughts and findings, and many photos, to come. Stay tuned.

Posted by Damien Huffer at 10:46 PM No comments: