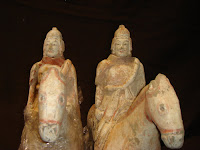 One of my earlier blog posts in June last year highlighted the growing trade in Dynastic period antiquities from China, and the various means by which they go from ground to gallery, fuelled by pop-culture and public misconception of the archaeological process. In that vein, a recent example of another smuggling attempt is worth mentioning here. According to an article in the Paramus Post (a daily newspaper out of Paramus, New Jersey), Customs and Homeland Security officers and investigators have seized five large-scale artifacts, including two sandstone Buddhas, two terracotta horse/rider sculptures, and a Bodhisattva head sculpture, roughly dating from the Northern Qi, Northern Wei and Song Dynasties (see example photo above left).

A final location(s) for the pieces is not mentioned; perhaps the relevant receipts/import-export forms were missing. Again according to the article, these artifacts could have fetched $250,000 together on the open market, but this is only an estimate. It is fortunate that this shipment was stopped at customs, but not surprising given the size of the artifacts involved. Unfortunately, for every large piece of sculpture or statuary that is recovered and repatriated, an untold quantity of smaller artifacts will reach their final private or gallery destinations, and China still has numerous difficulties stemming internal looting, controlling forgery and illicit auction houses, and conducting construction work with appropriate attention to at-risk archaeological/heritage sites, as this 2005 article suggests. Still, all involved in the above-mentioned apprehension should be given our heartiest congratulations. Constant vigilance!
Posted by Damien Huffer at 8:25 PM 1 comment:

A quick update on the ongoing, subcontinent-wide phenomena of idol theft/smuggling occurring throughout India, and perhaps Nepal: Two additional men were arrested in the 'Civil Lines' area of Allahabad last Wednesday night, on their way to deliver another stolen 'ashtadhatu' idol to a client in Mumbai, where they would then have received more than Rms. 20 million ($400,000USD)! According to police inspector R.B. Singh, the specific idol in question was of the goddess 'Durga,' and was stolen from a temple in Gujarat, although which specific temple is not mentioned. The report suggests that the two arrested individuals were well-established in the regional idol-smuggling world, with clients in many states and perhaps Nepal as well. All of the above fits established patterns, but I wouldn't be surprised if even more prominent "middle-men" are eventually arrested. The very fact that so many above-ground, publicly used temples are being robbed region wide, in addition to other, archaeological antiquities on the market from India, is a disturbing trend...
Posted by Damien Huffer at 7:38 PM No comments: