Just a reminder to my readers to please support the efforts of SAFE (Saving Antiquities for Everyone) in whatever way you can. The antiquities trade is a global crisis, and SAFE remains one of the only full-time organizations dedicated to education and outreach around the world; doing their (our) best to demonstrate and communicate that looting and the antiquities trade are deleterious wherever they occur. Furthermore, by now several other regionally-specific antiquities trade/heritage conservation focused blogs or organizations, including this one, connect to SAFE, and we all must stand in solidarity.
Posted by Damien Huffer at 6:43 PM 2 comments:

Just a quick post on a new incident of statue and idol thefts and attempted smuggling, this time out of Bangladesh, according to a recent article in the Daily Star (here). All involved were arrested in Bangladesh's main airport in Dhaka after being busted by customs before they could board flights to Bangkok. According to the articles, many of the confiscated statues were made of touchstone, metal or terracotta and depicted Hindu motifs. Amazingly, it appears that the guilty individuals were attempting to transport these bulky items in their luggage, although it's not clear if "luggage" in this case would actually refer to shipping crates.

A related article published in the Financial Express (another apparently prominent newspaper out of Bangladesh) came to my attention (once again) through Museum Security Network, and details that events of this nature have an active recent history in the country. It now seems that museums, and even archaeological sites exposed through planned excavation or development projects, are being deliberately targeted. Despite the somewhat strident tone of nationalistic rhetoric (in my opinion), the article makes a fair point that no nation should have to sit by and watch its heritage sites crumble, its archaeological sites be threatened by poorly planned development, and its movable cultural heritage be siphoned off, due to both local corruption and international avarice. Perhaps India, Nepal and Bangladesh can now work together on increasing enforcement and improving legislation to restrict cross-border trade in what is now apparently a subcontinent-wide problem. At the very least this should reduce the numbers of South Asian antiquities available to unscrupulous dealers and collectors overseas.
Posted by Damien Huffer at 4:50 AM No comments:

Not only the environment at risk... 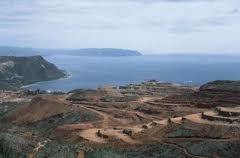 A recent news article published by Africa Review (out of Kenya), once again coming to my attention through Museum Security Network, clearly implies that not only natural resource/habitat destruction and forced human migration can result from seemingly rushed 'development,' but that it undiscovered archaeological sites might also be at risk. The project in question is the Ambatovy mine (targeting nickel and cobalt sources in the east of the island; slated to be the world's largest nickel mine by 2013), a joint venture with Canadian, Korean and Japanese partners (see photo above left).

Operational since earlier this year, it has already come under some criticism, according to the article, for clearing thousands of hectares of forest and displacing 'traditional' villages, due to the 220km long pipeline laid to connect the mine to treatment plants on the coast. This pipeline, adn the disturbance created to install it, occurred very close to several UNESCO World Heritage sites, according to the article. This is despite the apparent implementation of "conservation programs" to offset habitat losses, trumpeted by the Sherrit International Corporation, the mine's primary financial backers. However, the main point of the article is to publicize an international meeting that recently took place at the Malagasy Academy (in Antananarivo) to discuss the apparently 4,851 archaeological objects, ranging from ceramic to bone to "tumblers" to plastic (?), discovered during construction of mining facilities.

Unfortunately, the article gives no information as to context, level of previous disturbance or amount of archaeological material on the surface. The description provided makes it seem to me that the 'site' destroyed might even be a late historic-modern midden (trash mound). If any genuinely prehistoric or historic sites have been, or will be, uncovered during future mining expansion, the publicly available Ambatovy "code of conduct" should prevent the willful destruction of sites or sale of artifacts, if enforced. What more comes of this, how increased public exposure affects or reshapes operational procedures in the future, and how many new archaeological sites are even present in the area to discover...all appear to be unknowns. Thorough and up to date archaeological survey and excavation work around Madagascar has been growing in recent years, despite episodes of unrest and the continuous need to negotiate with/around development and conservation projects (here, here, and here for examples). What this history means for any future excavations, salvage or otherwise, in relation to Ambatovy, is unclear. Once again, time will tell...
Posted by Damien Huffer at 7:53 PM No comments:

In the same vein as the numerous recent examples of Hindu statues and idols I've posted about (e.g. here), two recent news articles suggest that a waive of Buddhist statue thefts have been occurring throughout Thailand (here and here). Apparently, dogs and alarm bells guarding many of these temples were not sufficient to prevent the thefts, which feed into a wide-spread network of illegal smuggling and sale. Fortunately, however, authorities have been on the ball, moving quickly to apprehend the perpetrators of the most recent reported theft (the Luang Phor Chiang Saen Buddha image, stolen from Wat Makok Simaram, Muang district). Their efforts netted two suspects and recovered 50 previously unaccounted for stolen items. Furthermore, the thieves confessed to eight other robberies since 2009, all targeting Buddha statues and temple paraphernalia. What is unfortunate is that the article reports that 36 registered statues have been stolen between 1996 and 2011, but only three have been retrieved. 531 unregistered statues (from smaller temples or rural villages?) have also been stolen, with only five recovered. Although in the case of the Chiang Saen statue, its final recipient and destination were within Thailand, it is unknown and unmentioned how many other stolen statues have found their way onto the international market. Although the villagers tried everything "metaphysical" within their power to ensure the statue's return, from 'merit-making' at the temple, to "cursing the robbers," in the end, the swift action of police came through. Let's hope this most recent arrest heralds increased vigilance and resources devoted to guarding these temples at all hours and recovering as much of what's already been stolen as possible.
Posted by Damien Huffer at 4:53 PM No comments: